Why Use Audio Streaming Services? | Save Our Classic Music Culture! 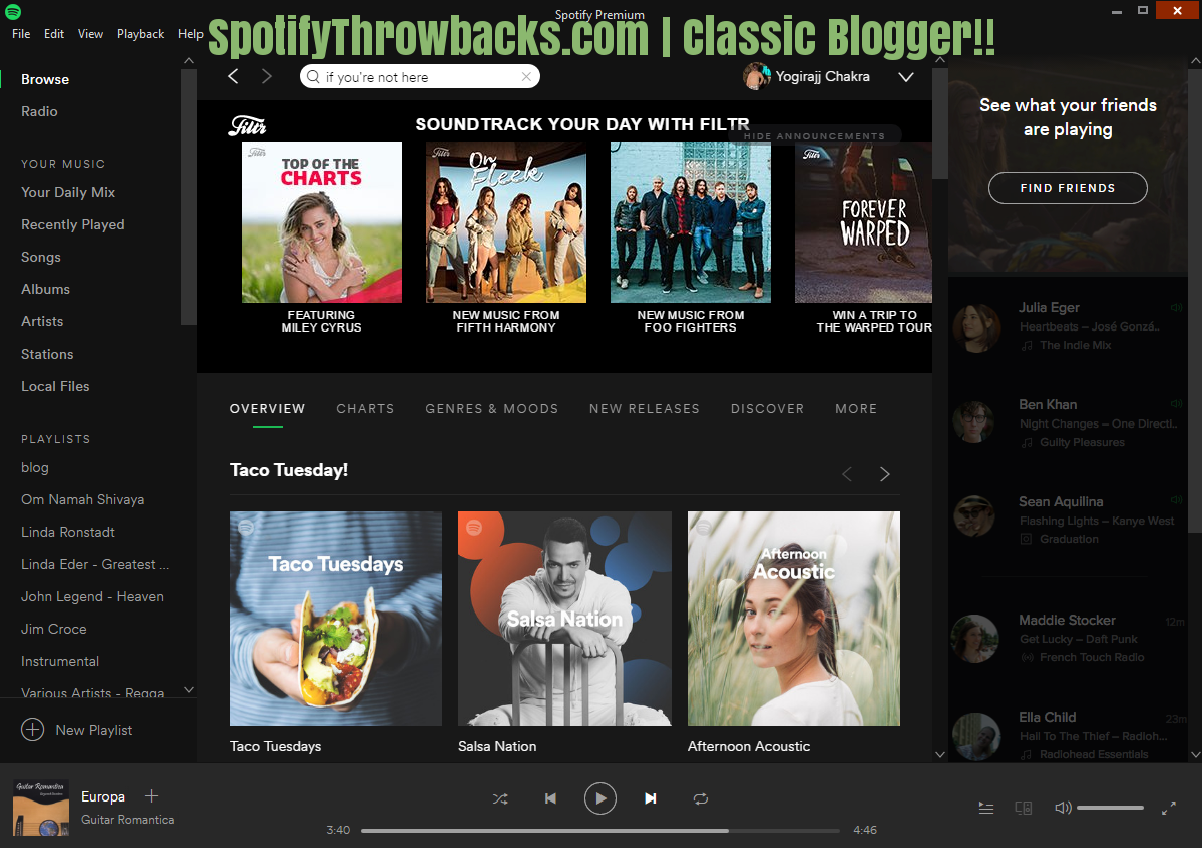 Just about all streaming services, and mobile apps with curated music/radio feeds contain built-in tools that allow us to share music with friends, children, grandchildren, and on social media and blogs. Services like Spotify are legal and fun to share oldies music everywhere and everyone. But the most important reason, we should use streaming that artist get paid for each music that is played on your device. Artists get paid even if you’re using Spotify’s free accounts. This is of particular importance to our old school artists, such as doo-wop groups, Motown sounds, disco queens and kings, etc. The reason being, in this day and age our favorite old school artists are no longer being advertised the way the should be; because of this their music is not being played. Not only are our beloved classic music in danger of being lost and forgotten, the artists are not getting paid because many older fans still have not adapted the new business model of legal subscription based streaming.

You know, there are some that talk big about “supporting Black business,” yet a lot of those same people refuse to pay $10 dollars a month (sometimes even less); or even to make the extra effort to use legal and free services like iHeart radio/Spotify who will pay artists, instead of solely using YouTube; to support their favorite Black/Latino artists (but I won’t go there. Keep in mind, I’m not trying to suggest that YouTube is illegal, but there are several huge issues. First is user uploaded content, which a significant portion of them ARE illegally uploaded. The only reason YouTube still exists, is because of the “Safe Harbor” laws. The second issue is, its setup is such that many artists are not getting paid. YouTube is not categorized in the same way as an actual streaming service, like Spotify. The service itself is not designed to function as a “music service.” You understand what I’m trying to say? And I have not found any proof that their “ad free” service is paying royalties for music videos without ads/or ads that are illegally monetized/not monetized. People don’t think of these things ’cause they just want to listen and share. There are a lot of things involved when it comes to the business of music. Do you realize that even your cable provider pays royalties on the music channels they offer, just so that you can sit back and enjoy them for free? Many of those channels offer some great Black music 24 hours a day.

All we have to do as fans to fix this, is to save our favorite golden oldies on services like FREE Spotify; AND and or others like them, thumbs up them, 5 star them, and share them. That’s it! You didn’t even have to spend a dime! By doing this, said artists will get not only get recognition/keep their music on their service, but they will also get credit and paid for each and every single play, from each and every device/IP address around the world. Doesn’t matter if it’s your computer, smartphone, television, Sony PlayStation, Roku box, or Blu-Ray player. Very much the same way that Hulu, and Netflix streaming works. It doesn’t matter what streaming service you chose to use, it doesn’t have to be Spotify, Deezer, Tidal, Amazon, GooglePlay, etc, as long as the services you use are legal. If you chose to listen to music via internet radio with your computer, that site/feed keeps track of how many people/IP addresses are connected so that the artists/songwriters get paid. It’s just a matter of personal taste and preference. You should also know that bigger streaming companies w/subscriptions pay the artists more fairly; which also gives you the added bonus (or privilege rather) of downloading tons (most times unlimited amounts) of your favorite artist’s music for off-line enjoyment. We are in essence paying for the unlimited license to listen to as much music our heart’s desires, legally! Live internet radio works a little more differently; however, I won’t get in to that. The important thing to know is that artist get paid fairly from well known live stations as well; for example, 106 lite FM, 103 KTU, Hot97, etc. The only problem with live stations is that their ecosystem does not allow a way for listeners to help preserve the music that is played (in other words, no like or thumbs up buttons). At least not yet (but we’re getting there.

You can even use totally free internet radio such as iHeart Radio or Pandora and accomplish the same thing (and you don’t have to pay a dime). Reason being is that licenses for music played have been paid for via external ad placements, internal affiliate ad revenue, subscriptions, paid album placements, sponsorship(s), and various marketing. So, you see it’s not exactly free, but it’s free for us to use. Please keep in mind that streaming radio is not the same as “on demand” streaming; whereas you pay to download and play what you want to listen to, whenever you want it. There are also many other benefits to paid subscriptions such as, unlimited radio skips; and special algorithms that learn the kinds of music you listen to, in order to help you discover new music. Most free services don’t offer unlimited skips, as it would be too expensive for the service to pay for all the music you don’t like; and if they do offer unlimited skips, it would actually be a small playlist with pre-selection of music (usually about 1-2 hours on average). All you have to do is sit back, enjoy, and thumbs up the songs you like and listen to, this is how you show your appreciation for your beloved old school

artists. By thumbs upping your music, it tells the service you’re using to not only keep said music in it’s library, but play/purchase more licenses for other songs like it; giving you the opportunity to possibly rediscover even more music you’ve forgotten about. Thumbing up could also help prevent a playlist station from playing repeated songs. Sometimes we have to depend on each other to help us rediscover music, by way of social media, blogs, and SHAZAMing music we hear from traditional radio, or TV specials. In turn, we can share THAT music with our friends on social media to help them rediscover music they’ve forgotten about (not to mention saving each other tons of money and foot work). It is important to understand that if we cannot find a particular music we like on said streaming service, we need to write them, email them, or fill our quick online forms to ask them to include that artists in to their library! This will help to keep our history; and how you can continue to enjoy your childhood memories (again and again) with digital sound! Guys, the reality is that eventually the only way you’ll be able to get physical CD’s or albums of music will be via collector websites, and collector mail order magazines (which do not have a high turnaround rate, which means you’ll be seeing a lot of the same shit). Now, I know that die-hard vinyl lovers may disagree with me. Yes, I understand that more vinyl records are being sold since the popularity of streaming, however, I believe that this is simply because people are now exposed to more varieties of music via streaming, apposed to only listening to the repetitive music being played through traditional radio stations. Secondly, there’s now an awareness that vinyls have now become collectors items. Which means you’re paying more for limited additions and imports. Also understand that when it comes to oldies, many of the music you hear on streaming will be hard to get or out of print. Thirdly, people that come from the 70s generation on down often have sentimental attachments to music on vinyl. Vinyl adds to one’s entire nostalgic experience. So, it makes absolutely perfect sense that more albums are being sold. Most young people today do not see vinyl, or CDs for that matter attractive, and have no emotional attachment. Understand that Albums WILL be obsolete within the next couple of generations, just like 8-tracks. If your favorite streaming service doesn’t have the license for a particular album you want, you can purchase it on Amazon or GooglePlay, they both sell DRM free music downloads, and both have a good collection of rare and obscure music. Even Apple is now creating Android apps in light of their new streaming service; that should be of some indication to music fans just how huge music streaming is. No longer do we have to worry about buying bigger storage space. Very few retailers will carry albums & CDs simply because they will become a headache for most retailers (unless they’re a specialty shop).

Older seasoned folk, who love their classic music around the world need to start using digital technology more. I understand the whole nostalgia of owning a cassette and or turntable; but the digital world plays a very important role in the survival of classic music and it’s artists. Plus you get the benefit of listening to your favorites at superior quality. If you have high speed, I’ve found some of these free radio stations transmit as high as 192kbps; that’s as close to CD quality your going to get for internet radio. Not to mention that the transfer protocol software has improved significantly over the past few decades. Actually, even 128kbps sounds damn good too. The quality is so good, there really isn’t that much sound difference btw 128 & 192; unless you have one of those expensive Bose systems; then you’ll be able to hear more crispness and more subtle instruments you may not have noticed before. This is your opportunity to expose your children and grandchildren to real music, culture, and history.